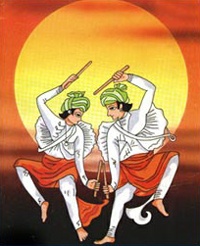 Music and dance are at most colourful and energetic during weddings and at Navratri.
Folk music and dance of Gujarat is about the feeling of, ordinary people. The Songs and tunes, are made up, and handed down from generation to generation. The folk songs have a special meaning or message, for example the themes of a song may be a historical subject, like a battle or flood. A legend or story about a god or Goddess. Or a subject from life, such as marriage, birth, death or love.
The traditional dances of Gujarat are known as Raas, Raasda, Graba and Garbi.These dances are associated with Festival of Navratri, but also performed at ceremonies like weddings Birthday’s Religious Programmes. Raas is a collective circular dance and a song accompanies it.
Raas is performed with small sticks known as Dandias. Raasda Garba and Garbi are performed with handclaps and rhythmic steps and music is the main feature in the dance.
Raas and Garba dancing with music also relate to the devotion of Lord Krishna, and songs depict the story of Krishna and Gopis. Garba is pot with many holes on which a lamp is lighted during Navratri Festival. Garbi is a canopy under which an Idol of Goddess Amba and other deities are placed.

Dandia Raas and Garba dancing is the best folk art of Gujarat in general, but Saurashtra in particular has preserved the traditions to a ver large extent. These dances invariable reflect the life of Saurashtra. Even today Gujarati community have still preserved this rich cultural heritage of traditional folk art. Folk dancing has also captured the stage and theatre shows in India and around the world. This has recently become so popular that it is now freaquently featured in the Bollywood movies.
Dandia Raas of Maher community is very popular and has won many awards for their performances. The most proud occasion was when Maher men performed in New Delhi on the Indian Independence Day celebrations.
The dance of Maher’s attracts great attention due to their stout spirit and physical appearance and their fighting spirit that is reflected in their dance. The movement of their feet is very fast and takes strong steps, like the soldiers marching in the battlefield. They apply a considerable force when striking the sticks, similar to using swords against the enemy.
Origin and development :Raas
Primitive tribals expressed their emotions and passions through bizarre grunts, howls, roars, cries and noisy dances. In early days raas was played in the open place on outskirts of a village or a township, under the silvery moon light of the post monsoon clear transparent skies. Gradually it began to be confined to cramped enclosures inside residential areas for reasons of security.

This necessitated the provision of artificial lighting system in place of moonlight, which could not be available in irregular crowded spaces or small squares surrounded by buildings.