The Shrimad Bhagwat is one of the most sacred books of the Hindus.

It gives a tremendous insight, a profound vision, and an entirely new perspective to the person who hears the narrative. On hearing, a person is never the same. There is a complete metamorphosis, a complete transformation, literally a new birth. Atman (soul) by it’s own nature is sovereign – it cannot by nature be bound – whatever bondages felt are sheer illusions of the mind. Shrimad Bhagwat provides that light which enables Jeeva (human being) to experience the wonderful freedom of liberation. One feels, “Yes, I am free!” Shrimad Bhagwat expresses this philosophy through the narration of the life stories of 24 incarnations of Lord Vishnu. Amongst these, the tenth volume of the Shrimad Bhagwat narrates in infinite detail, the story of Lord Krishna. Since all 24 incarnations are of Lord Vishnu, it is a vitally important scripture for the Vaishnavites.

Written by Sage Ved Vyasa the Bhagwat leaves no topic untouched – social, political, and economic systems – all these have been covered and commented upon by him. Not just issues relating to self-liberation but even our day-to-day problems have been effectively resolved in Shrimad Bhagwat. Hence it can be emphatically stated that Shrimad Bhagwat is an exposition, which explains human life very clearly, it is a direction leading to the ultimate liberation of the soul. It is therefore an important guide for the conduct of human beings in all their affairs.

Ordinarily, reading and listening to Shrimad Bhagwat is a week long Anushthan (a religious commitment), but even an entire lifetime may not be enough to understand it in depth and explain it to others. It is such a wonderful, sublime scripture but King Parikshit had only seven days to live and it is said that by listening to such a seven-day narration of Bhagwat Katha King Parikshit attained liberation! Not by death but by emancipation from ignorance and fear. Thus Shrimad Bhagwat liberates us from fear, problems, and ignorance. In essence, this is the crux of Shrimad Bhagwat. Content wise, it comprises three main dialogues or principal conversations – one that of Shukadevji and King Parikshit, second between Sutji and Shaunak and other Rishis at Naimisharanya and the third between Vidurji and Maitreya on the banks of the river Ganga. These three principal conversations convey the voluminous Bhagwat beginning and ending with the dialogue between Sutji and Shaunak and other Rishis.

This four quatrain (8 verses) of Bhagwat was voiced by Shri Narayan Bhagwan and heard by Brahmaji as narrated in the second volume. Brahmaji then narrated the same four verses (shlokas) to Narada who in turn conveyed to Sage Ved Vyasa but told him that this was only formularized, now expand it’s (Vyasa) purview. The seat from where such knowledge is expounded and explained in detail is called ‘Vyas Peetham’. For this very reason we call the narrator of Shrimad Bhagwat ‘Vyas’. It is more a qualitative noun than a personal noun. Thus Vyasa elaborated the four shlokas (verses) in 9000 verses spread over 335 chapters and 12 volumes. Then Bhagwan Ved Vyasa taught it to Shukhdeva, who then narrated it to King Parikshit. Sutjii in Namisharanya to Shaunaka and other Rishis conveys the same conversation. All the different periods of these separate conversations are mentioned in Shrimad Bhagwat.

The narration of Shrimad Bhagwat Katha is arranged for many reasons; raising funds to help medical institutions or provide medical relief to people affected by natural calamities, to fund and raise school/colleges and help rural development. But it is mainly arranged for the upliftment and welfare of the people and society, who, by listening to the katha would understand God and learn the way to reach him, helping inducing spiritual growth within themselves and most importantly becoming righteous and virtuous human beings. In the olden days it was primarily arranged when there was a death in the family. Amidst the encircling gloom of sadness and acute depression, the katha narration created a major transformation, bringing to a grief ridden family solace, comfort, equanimity and a philosophic vision. The Bhagwat Katha drew them out of their sorrow and removed them from their mourning. Therefore the Bhagwat Katha is described as “Shoka Moha Bhayapaha”, that which destroys attachment and consequently removes sorrow and fear. By listening to ‘Shrimad Bhagwat Katha’, devotion (Bhakti) pervades our heart and minds. This devotion destroys attachment, sorrow and fear from our minds. What is this devotion or ‘Bhakti’? It is nothing but love!

Love is a sublime experience. It moves and spreads in all directions and becomes universal. When love becomes unending, human beings attain sainthood. The body becomes a temple – and the heart a priest! Slowly, but surely Shrimad Bhagwat enables one to reach that stage. When universal love and devotion is attained, the sorrow, attachments and fear vanish. Sorrow or mourning is connected with the past; attachment is connected with the present and fear with the future. These are the three factors that disturb everyone. Mourning the past, attachment for the present, and fear or worry for the future. And who does not long for peace? Whether a person is a theist or an atheist, everyone longs for peace. Everyone wants joy. When these three dominant influences vanish, one becomes quiet and lucid.

It is not that Bhagwat Katha liberates the departed soul alone. It even frees surviving members from sorrow, attachment and fear. Thus liberation is in a wider concept. It is not as if one is liberated only after one dies. It can be experienced even during a person’s lifetime, now and here also. That is the teaching of Shrimad Bhagwat Katha. 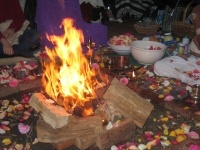