At a distance of 65 Kms from Palanpur and 45 Kms from Mt. Abu near Gujarat Rajasthan border the religious town of Ambaji is located. This town is famous for the Maa Ambaji temple, one of the richest and holiest temple in Gujarat attracting lakhs of pilgrims from Gujarat and neighbouring Rajasthan every year. The original seat of Ambaji Mata is on Gabbar Hilltop, which is 3 Kms away from Ambaji town. Ambaji Mata temple is one of the 51 shakti peeths where it is believed the heart of Goddess Parvati fell.

Ambaji Mata temple at Gabbar is very ancient, origin of which is lost in antiquity. It is believed that Goddess Amba was one of the deities of Pre-Aryan race, which Aryans absorbed in their pantheon. On the Gabbar Hill the footsteps of Goddess are imprinted. The imprint of Her chariot is also found here. It is believed that the tonsure ceremony of Lord Krishna also took place here. Ambaji temple has a golden yantra made jointly with the yantra of Nepal Shaktipeeth at Ujjain. There are 51 shlokas on the yantra.

Lakhs of devotees visit the temple every year especially on Purnima days culminating into a large mela on Bhadarvi Purnima. Goddess Ambaji Mata has been fulfilling wishes of her devotees for thousands of years.

There are three major sites to be visited on Gabbar Hill. One is the Holy New Temple of Mata Ambaji, where there are some Foot prints incurved on the rock. The other one is Holy Tree of Pipal, under which Lord Krishna’s hairs were removed as a ritual in his childhood. And the third one is Cave of Ambaji, where devotees can hear voice of the swinging of Mataji. Shri Arasuri Ambaji Mata Devasthan Trust has also planned to resurface the surrounding rocks at the Gabbar temple and to enlarge the Gabbar Chowk, with marble floorings. It is also decided to repair all the foot steps on the way to Gabbar and to construct a broad Sun Set Point on the top of Gabbar Hill. The Temple trust has also proposed to design a big parking plot, restaurant, canteen and shopping complex at the bottom of the Gabbar Hill Chotila dedicated to Goddess Chamunda is built on a hill called chotila at a height of 1,173 feet. The temple is crowded with tourists and pilgrims all round the year specially during the Navratri Festival. The Chotila village is sited at the foot of the Chotila hill.At the end of the navaratri festival a big havan is taken place on top of the chotila hill. Chotila has more than 700 steps. At the bottom when you come down from chotila hill there are many shops were you can by many religious items such as matajis chundari,kunko(religious powder), cassetts and lots more.thestory is when Demons Chand and Mund came to conquer Devi Mahakali and in the fight that ensues, the Devi cut their heads and presented these to Maa Ambika, who in turn told Mahakali that you will be worshipped as Chamunda Devi. 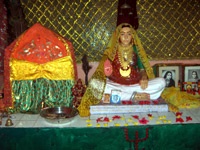