Ravi Randal Maa is a Hindu Goddess and Kuldevi, whose main temple is located in Dadva. She is thought to be the consort of the Sun Deity: Ravi/Surya and Randal Mataji is mainly worshipped by the Gujarati people of India.

So due to this trick of Lord Suryanarayan, he got what he wanted that is he married Randal Mataji and from here the story starts.

Randal Mataji gave birth to a son (Yamraj) and a daughter (Yamunaji). Due to the extreme shine of Suryanarayan Randal Mataji wasn’t able to look at him. Lord Suryanarayan doubted that Randal Mataji was proud of her beauty and just because of that she was not looking towards him. Hence, He gave curse that her children (Yamraj and Yamunaji) will suffer by roaming in jungle.

Randal Mataji had now no other way since she can’t go to her husband and her father also won’t let her to live there. So she had only way that was to go to jungle and do Tap. Meanwhile Mataji’s shadow-image, which she left with Lord Suryanarayan gave birth to two children (Sanidev and Tapidevi). Yamraj and Sanidev had a quarrel, so Sanidev’s mother gave curse to Yamraj that he will bleed whenever, he’ll put his legs on land. In the evening, when Lord Suryanarayan came back, Yamraj told him that mother gave him a curse that he’s bleeding whenever; he’ll put his legs on land.

The return of Mataji from Jungle

Lord Suryanarayan brought Randal Mataji back to his house. At that time the shadow-image of Randal Mataji asked the actual real Mataji to do something for her in return for the favor she carried out. Randal Mataji gave promise to her that when any person will do ‘Lotas’ (a rituals done by Hindus after fulfilling their hopes) will always be in pairs, i.e., one for Randal Mataji and one for her shadow-image. Lord Suryanarayan promised that during ‘Lotas’ he would be there in the form of horse. Unless and until the activity called ‘Ghoro Khundavo’ is not completed the ritual is not completed successfully.

Lord Suryanarayan asked Randal Mataji to go to ‘Mrityu Lok’ (earth) and rescue the lives of people from anti-social elements and show them the path of religion and truth.

It was hard to go on earth in her original form. So she had to find some other alternative. Hence Mataji took the form of child and sat under a tree without making any sort of noise. That was the time of famine in Gujarat and Saurashtra. So the shepherds of Maldhari (a tribe) were roaming here and looking for fodder to serve their cattle. One of the shepherds saw the child under the tree. He went to that child and asked her who was she? And why she was alone in jungle? Who kept her there? Mataji didn’t spoke anything but answered by making expressions that she was dumb and alone. Maldhari felt pity on her and took her with them. They named her ‘Randal’ as she was found in desert.

The wife of Maldhari took care of her as her own daughter. As Mataji was with Maldhari, famine was over and rain was in plenty. Many people in the family of Maldhari were lame, blind, and leprous. Mataji cured them and made them healthy. Maldhari people were not able to identify her. Once Maldhari made camp near Vasavadi River. At the bank of this river there was a city named Dhutarpur was situated (which later was renamed as Vasavad).

Servants of King were taking Milk, curd etc from Maldharis. Randal Mataji showed herself as teenager girl of 16 years to them. Her beauty amazed the servants so they praised the beauty of Randal Mataji in front of king. On hearin
g this king got crazy about her. King went to the camp and asked for the beautiful girl of 16 years in the group. But Maldharis were surprised to hear this since Randal Mataji was in the form of child with them. King thought that Maldharis didn’t want to give the girl and hence he ordered his soldiers to kill everyone in the group.

The soldiers started killing the people very cruelly. At that time Randal Mataji couldn’t control herself. She became angry; she put her hand on a cow and converted to a lion. She sat on the back of lion and started killing the soldiers. King and other people realised their mistake and saw that she is none other than goddess Jagdamba! They bowed down before her and requested that they did not know the real truth and begged to forgiveness. Mataji calmed down and gave life to dead soldiers. Because of this battle the place got the name ‘Darva’.

Randal Mataji blessed the Maldharis and she took a promise from king that he will not repeat the mistake in the future. Randal Mataji gave place in heaven to Maldhari and disappeared. The People started praying Randal Mataji from then on. 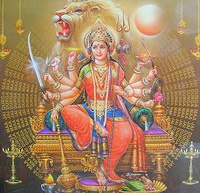