This is the story of the most outstanding Mer who waged a single handed fight against the regime of Jamnagar state. It was sometime in 1830 that Natho Bhagat of Modhwada village came to know about the theft of 10 buffaloes of his father’s sister by the robbers from Jamnagar territory. His appeals to some of the officers of the start in the neighbouring Ranpur to help return the buffaloes were rudely turned down. Instead of accepting complaint, he was insulted more than once. His roaming about for three days to convince the officers to take action was of no benefit. At long last, he decided to use force and took away 100 cows of the state from the Rabari herdsmen in Ranpur.

Later on, Natho took courage and openly became a law-breaker called “Bharwatio” the outlaw. He fought several times against the soldiers of Jamnagar who tried to capture and punish him. Natho Bhagat with his Makrani associates decided to take shelter at the natural hollow boulder called Polo-Pano in the Barda hills near the village Khistri. It was from here that he went on raiding a number of villages of Jamnagar state in the area of Ranpur and Barad. The state of Jamnagar was not able to do anything to stop the raids which were extended even to the border of Kutch.

Later on, he broke the defence of Davalia and looted the property of the state subjects. It was difficult for anybody to kill Natho Bhagat because he possessed miraculous powers of what I known as Shial Singh in his thigh. His opponents, Babi Nawab of Junagadh and the ruler of Jamnagar were constantly in the state of fear. He also commanded miraculous help of Gorakhanthji of Idar.

The Bard of Modhwada village was full of praise for the bravery of Natho and composed folk songs in which he asserted that “Without Natho Bhagat, all the eleven Mer linages would have been of the status of trash”. This praise of Natho Bhagat was taken as insult by other Mers. It was challenges by Rano Khunti, who later accepted the superiority of Natho in the Mer community. There are many folk songs and tales composed in his appreciation and praise by the well known Gujarati folklorist Zavrchans Meghani.

Even until this day it is said that a Modhwadia Mer under no circumstances drinks water from a Khastriya household, this due to the murder conspiracy that Punjo of the village Khistri committed upon Natho Bhagat. 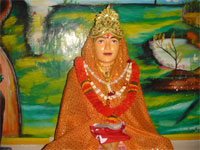 The brave Rani of Nagaka Village